Bishop Joseph Lawson Howze, Bishop Emeritus of Biloxi, MS, Biloxi’s founding bishop and first black bishop in the 20th century to head a diocese in the United States, passed away Wednesday, January 9, 2019 in Ocean Springs at the age of 95. While we are saddened by the death of Bishop Joseph Lawson Howze, we rejoice in his life. His was a life well lived in faithful service to Almighty God and to the people of Mississippi.

He began his school years at Most Pure Heart of Mary Elementary School in Mobile, AL. That first year of school was interrupted in 1928 by the death of his mother, just six days after she bore her fourth child. The eldest, at age 5, young Lawson (Joseph is his baptismal name) was shuttled back and forth between the homes of his grandparents, aunts and father, who later remarried and fathered three more children. His remaining elementary and high school years were spent at Baldwin County Schools and at Mobile County Training School at Plateau.

After graduating as Valedictorian of his 1944 high school class, four years later, he graduated with honors, and as president of the senior class, from Alabama State College, in Montgomery. He had intended to study medicine, but instead earned a bachelor’s degree in science and education. He began his two-year teaching profession as the Biology and Chemistry teacher at Central High School in Mobile.

Bishop Howze had first been a Baptist, then a Methodist, serving as a choir director and church organist and pianist. But while he was teaching at Central High, he was drawn to the Catholic faith through the example of Marion Carroll, Jr. who was one of the seven Catholic students in his biology class. Soon after he began instructions in the Catholic faith under the direction of Josephite Father Benjamin Horton.

On December 4, 1948, at age 25, he was baptized at Most Pure Heart of Mary Church in Mobile, and on the following day he received his First Communion. He soon realized that he would really like to be a priest and began to inquire about the process.

In August 1952, he wrote to Bishop Vincent S. Waters of the Diocese of Raleigh NC, asking to study for priesthood in that diocese. In September 1950, he entered Epiphany College in Newburgh, NY to begin preparatory studies for the priesthood. His priestly studies were interrupted for a year when he went to teach biology at St. Monica’s High School in Tulsa, OK.

In January 1953, he was adopted as a student for the Diocese of Raleigh, NC and began his studies at the Diocesan Preparatory Seminary in Buffalo, NY. On May 7, 1959, Bishop Waters ordained the young priest for the Diocese of Raleigh. Father Howze said his first Mass at Most Pure Heart of Mary Church in Mobile on May 10, 1959. He served as pastor of several parishes in North Carolina during his 13 years of priestly ministry there.

On November 8, 1972, Father Howze was appointed by Pope Paul VI as the auxiliary bishop of the Diocese of Natchez-Jackson and was ordained a bishop on January 28, 1973 in Jackson by Luigi Cardinal Raimondi. Within a year, he was named president of the National Black Catholic Clergy. On March 8, 1977, Bishop Howze was appointed by Pope Paul VI as the first bishop of the newly established Diocese of Biloxi. Establishing a new diocese was hard work, but Bishop Howze was very proud of what he, with the help of devoted clergy, religious and laity, accomplished during his tenure as bishop of Biloxi and was forever grateful to the people of the diocese for their unfailing generosity of time, talent and treasure.

During his leadership of the Diocese of Biloxi, Bishop Howze served as a member of the National Council of Catholic Bishops (NCCB) Ad Hoc “Call to Action” Committee, the World Peace Committee of the United States Catholic Conference (USCC), the Mississippi Health Care Commission, the NCCB Liaison Committee to the National Office for Black Catholics; the NCCB/USCC Education Committee Administrative Board, Alternate, Region V; the NCCB Interreligious and Ecumenical Affairs Committee, and the Biloxi Regional Medical Center Board, as well as a member of the Board of Directors for the Gulf Pines Girl Scout Council and the National Episcopal Liaison of the Apostleship of the Sea.

Bishop Howze retired May 15, 2001, after serving as bishop of the Diocese of Biloxi for 24 years. He loved the Diocese of Biloxi and prayed unceasingly for its continued success. He had a genuine concern for the salvation of souls. Now, we pray that God, who called Bishop Howze to priesthood and the episcopate, will now welcome him to his heavenly home where he will continue to intercede for us. May he rest in peace.

A visitation for Bishop Howze will be held at the Cathedral of the Blessed Virgin Mary on Tuesday evening, January 15, 2019 from 5:00 pm until 8:00 pm with a 7:00 pm Vigil of the Deceased with a recitation of the Rosary to follow. A Mass of Christian Burial will take place on Wednesday, January 16, 2019 at 10:30 am where friends may visit from 8:30 am until Mass time. The address of the Cathedral is 870 Howard Avenue, Biloxi, MS 39530. Interment will follow in the Bishops’ Cemetery and Memorial Prayer Garden.

The Howard Avenue Chapel of Bradford-O’Keefe Funeral Home is in charge of arrangements.

May Bishop Howze and the souls of all the faithful departed, rest in peace.  -Amen. 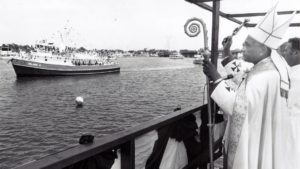 Bishop Joseph Howze blessed a passing boat at the Biloxi Blessing of the Fleet on May 31, 1997. [SUN HERALD ARCHIVE]